Sign in
Recommend Bubba's obituary to your friends
Plant A Tree 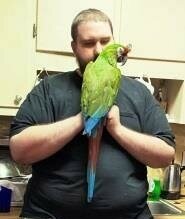 Bryant Peirce Mustard “Bubba” – A Celebration of Life service for Bryant “Bubba” Mustard, 30, of West Columbia, will be held at 10:00 AM, Saturday, October 8, 2022 at the Mausoleum Chapel of Woodridge Memorial Park, 138 Corley Mill Road, Lexington, SC 29072. Woodridge Funeral Home of Lexington is assisting the family with arrangements.

Bubba Mustard passed away September 25, 2022. Born in Columbia, he was a son of Leatha W. Mustard and the late William David Mustard. Bubba came into this world with a sparkle in his eyes that everyone saw as trouble, except for his momma. He had the biggest heart of us all, unless you insulted his food. He grew up with two phenomenal sisters who he loved to terrorize. In his younger years, Bubba could often be found with his nephew, Avery, running around the yard in nothing but an oversized t-shirt. His nieces and nephews adored him, seeing him as a best friend and confidant. When he was eleven, Bubba met his love, a military macaw named Holly, and when he was 28, he saved Odin. He loved Holly and Odin to the moon and back.

Bubba graduated from Airport High School with the nickname “Colonel Mustard” with his best friends, Matt, Ryan, Jody, and Josh, “Harry Potter.” His heroes and role models were his daddy and his brother, Michael Paul. Bubba found his love of cooking in the kitchen of his hero, his daddy, and created the most delicious dishes you would have ever had. If you enjoyed his food, you were an automatic friend. Bubba’s time was filled with bringing his family and friends together with meals that he prepared. This was his love language. When he received his CDL, he was able to travel to all 48 continental states. While he enjoyed his time traveling, he eventually returned to his passion for cooking. He had a heart for everyone and a big, contagious smile that lit up the room with one of his jokes.

Bubba gave the best hugs, often leading him to carry you around the room. He didn’t seem to meet a stranger. He enjoyed fast cars and motorcycles, was an avid gamer, and built his own computer gaming system.

Bubba lived his life without hesitation or holdbacks to the world around him. After the passing of his father, he became the rock of the family. Not only was he loved, but he was love. Bubba will be remembered by all who had the pleasure of being in his presence and will be deeply missed. We love you Bubba!

Bubba's Celebration of Life service will be webcast for those who cannot attend his service in person.  Click on this link to view his service from October 8, 2022 until January 8, 2023.