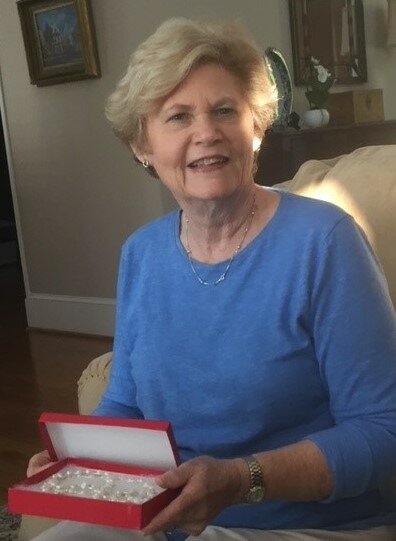 Paula McMillan McFadden passed away on May 24, 2022 in Irmo, South Carolina with her family by her side.  Born in Richland, Washington, she was the daughter of the late Gilbert Edward McMillan and Janet Tyrrell McMillan.

Paula was raised in Aiken, South Carolina and was a proud graduate with the Class of 1964 at Aiken High School.  She shared a special bond with many high school classmates who remained a constant presence throughout her life.  She thereafter attended the University of South Carolina, where she met her husband in math class when she was a freshman and he a sophomore.  She graduated in 1968 with a B.S. degree in Business Administration.

Paula and Charles were married in October 1968 and made Columbia their home.  She devoted her life to family, friends, and service, and created countless relationships that spanned decades.  In 1975, she began attending a newly formed St. Mary’s Episcopal Church, which initially met inside of Irmo High School, and has remained a faithful member through the years.  Her friendships vast and varied, Paula was an especially proud member of her bridge club (the “Bridge Babes”) that formed over 35 years ago and continues to meet regularly over a bit of bridge, much conversation, and perhaps a little wine.  She also served on the Richland/Lexington Disabilities and Special Needs Board for over 20 years.

For the last 25 years, she lived with her husband and daughter on Lake Murray admiring beautiful sunsets, enjoying boat rides, and watching her grandsons swim and fish from their dock.

She is remembered for her positive spirit, thoughtfulness, and kindness.  Referred to as “MaMac” by her grandsons, Paula is and will continue to be a guiding light for not only her family, but also many of the friends and acquaintances she touched during her life.

The family wishes to express special thanks to the caregivers at Interim HealthCare Hospice, especially Dee Nix.

A memorial service will be held on Saturday, June 4, 2022 at 11:00 a.m. at St. Mary’s Episcopal Church, 170 St. Andrews Road, Columbia, South Carolina 29210.  A reception celebrating Paula’s life will follow the service at the church.

In lieu of flowers, memorials may be made to St. Mary’s Episcopal Church, Able SC, or a charity of choice.  Woodridge Funeral Home is assisting the family, and fond memories may be shared at www.woodridgefuneralhome.com.

Share Your Memory of
Paula
Upload Your Memory View All Memories
Be the first to upload a memory!
Share A Memory
Plant a Tree