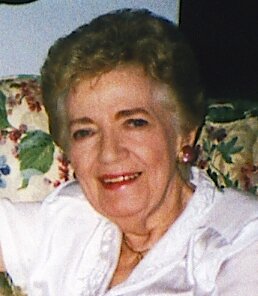 Billie June Roth, 89, passed away peacefully on Sunday, November 7, 2021.  She was born August 13, 1932 in Pittsburgh, Pennsylvania to William Calbick and Martha Erdman.  She is survived by her son, Eric (Karen) Roth; and nephews, Brian Scuilli (Cindi) and Stephen Scuilli. She was preceded in death by her husband of 57 years, Robert Roth, as well as her sisters, Ruth (Louis Scuilli) and Carol (Earl Irwin).

Billie and her two sisters were raised in the Oakland area of Pittsburgh.  There, she attended Fifth Avenue High School, where choir and singing were among her main interests.  After high school, she first worked in retail.  Not long after, she met the love of her life, Robert Roth, and they married in 1950.  Robert enlisted in the Army, and the two lived in California and the state of Washington while Robert was in the service.  After his discharge, they moved back to Pittsburgh, where they both worked in art and eventually opened a commercial art studio downtown.  After the birth of their son Eric, they moved to Florida for several years near some of Robert’s family, and later returned to Pittsburgh to settle in the Crafton neighborhood.  Here, Billie raised Eric and also worked in both retail and banking.  Billie and Robert eventually retired in Columbia, SC, where their son Eric and daughter-in-law Karen had also moved.

Billie was very active in Eric’s schooling at all grade levels, including serving as a school chaperone, PTA member, and band parent organizer.  She also enjoyed many pastimes with her family such as regional traveling, backyard cookouts, card and game nights with her sisters, attending concerts and musicals, cooking and baking, doing crafts and taking calligraphy classes.

A private service for immediate family and close friends will be held at a later date. Woodridge Funeral Home of Lexington is assisting the family.

In lieu of flowers, memorials may be sent to The Salvation Army or to Alzheimer’s Association.

To plant a beautiful memorial tree in memory of Billie Roth, please visit our Tree Store