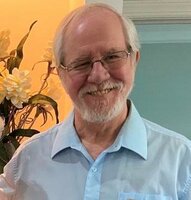 Terry was born in Philadelphia, Pennsylvania on January 12, 1952, and was the oldest son of William Hubert and the late Doris Taylor. He was a 1970 graduate of Irmo High School. Terry worked as a mechanical designer for most of his career, and retired from Westinghouse in 2017.

Terry was a loving husband, daddy and papa. He loved spending time with his kiddos, enjoying rides on Lake Murray, vacations and going to his grandchildren’s events. His family will miss him terribly. Terry was an active member of Mt. Horeb UMC for many years, and enjoyed volunteering wherever he was needed. He loved his church family.

Terry was predeceased by his mother, Doris Taylor, his brother, Chris Hubert and his step-mother, Lorraine Hubert.

Terry’s family would like to thank all those that prayed, reached out, loved and helped him. In lieu of flowers, donations may be made, in his name, to Mt. Horeb UMC General Fund, 1205 Old Cherokee Road, Lexington, SC 29072.